Four Star Transportation’s roots go back to the earliest highways cleared and buildings constructed in the Detroit Skyline. Founded by the C.J. Rogers Co. in 1920, the construction and transportation businesses were purchased by the founder’s son-in-law, William H. Leoni, who became the head of C.J. Rogers in 1974. In 1994, current owner and president Michael C. Leoni, William’s son, took over the helm and re-named the company, Four Star Transportation. 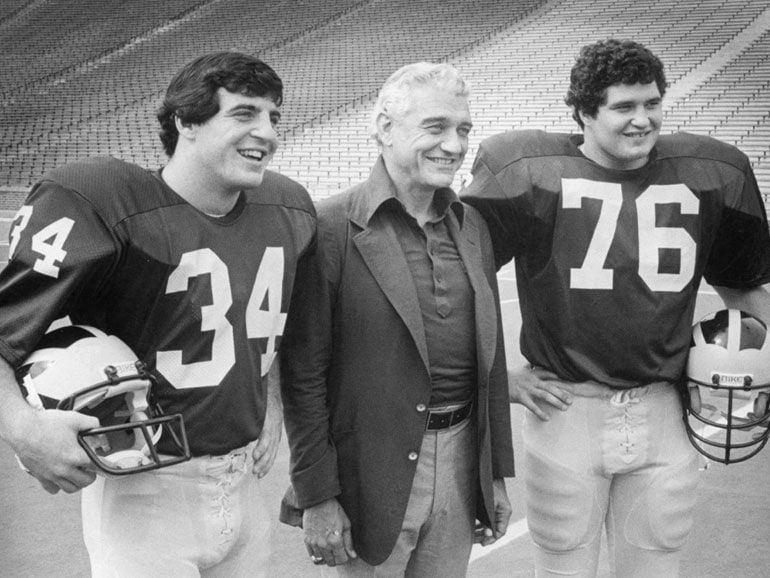 Michael Leoni (right), pictured with his father William and brother Patrick, during his football days at the University of Michigan.

Pictured here is the Davison Freeway built in 1944 by Chas. J. Rogers Inc. Eventually, after his death a proclamation was made to name the intersection of the highway after him. 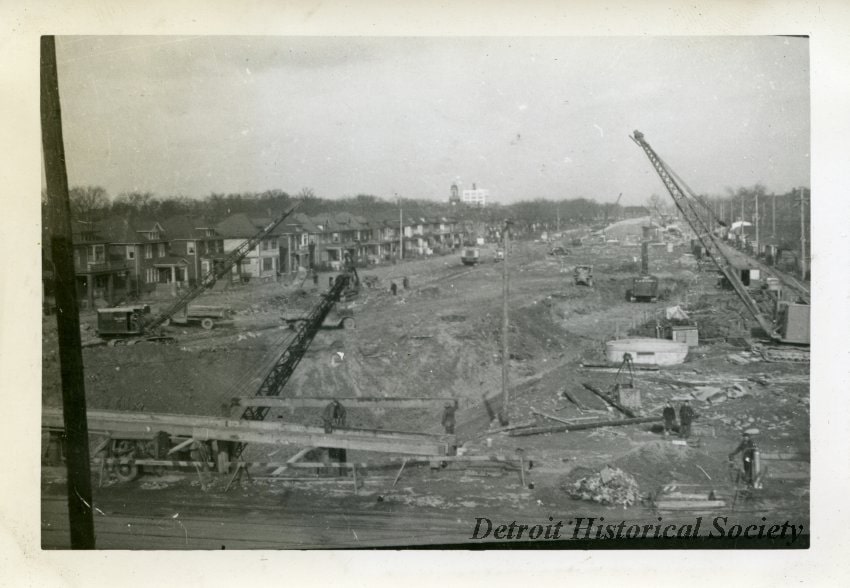 Here is a picture of the sign honoring Charles Rogers on the side of the Davison I-75 Interchange today titled “Charles J. Rogers Interchange.” Roger’s legacy and impact on the early construction of Detroit and its surrounding areas will never be forgotten. 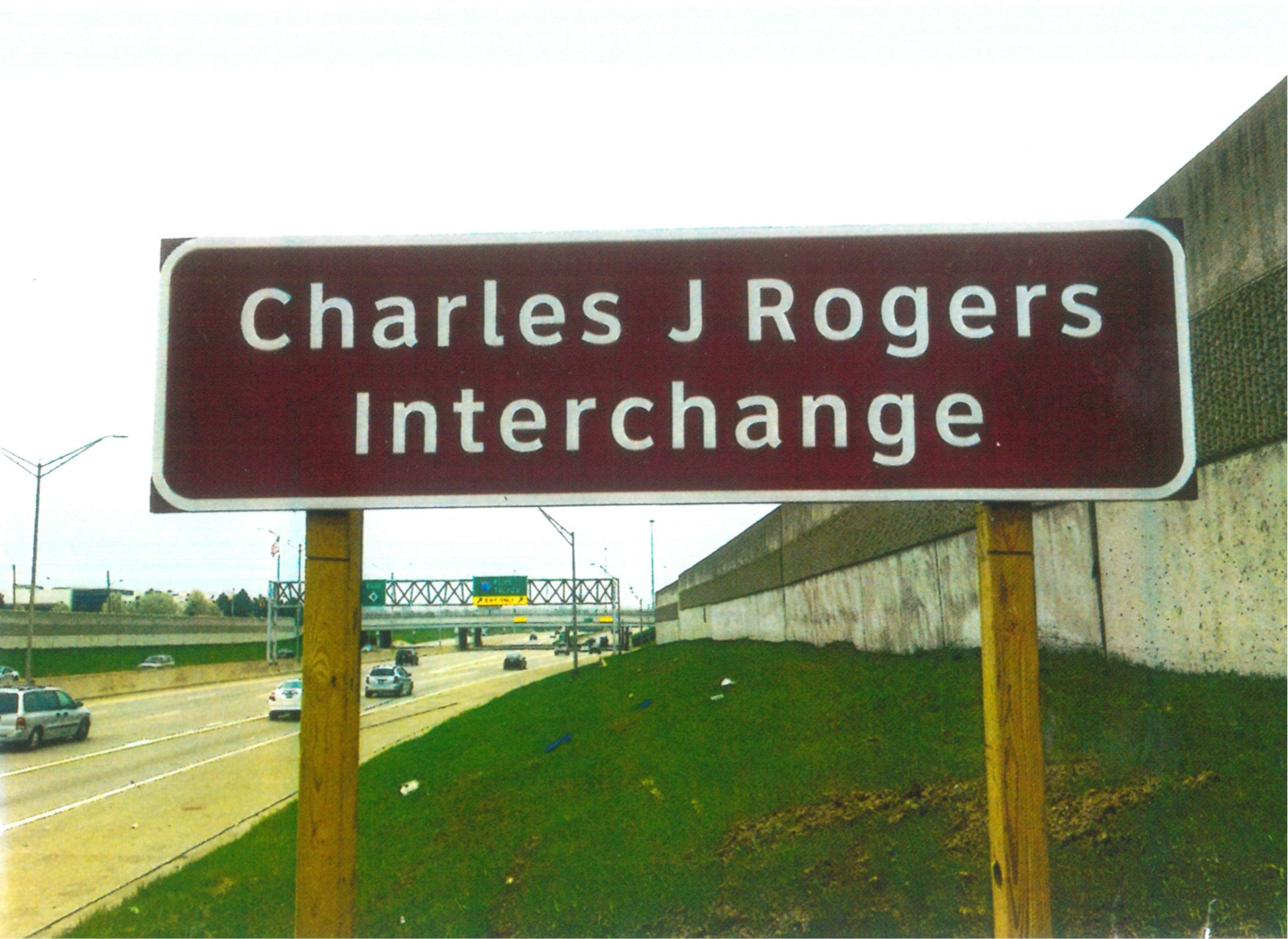 CHARLES J. ROGERS, INC. was a very prominent heavy contractor in the Detroit area for many years, performing heavy excavation jobs. This particular photo captures one of C.J. Rogers freeway widening jobs near the Davison Freeway looking south at 3rd near Wildemere Avenue. 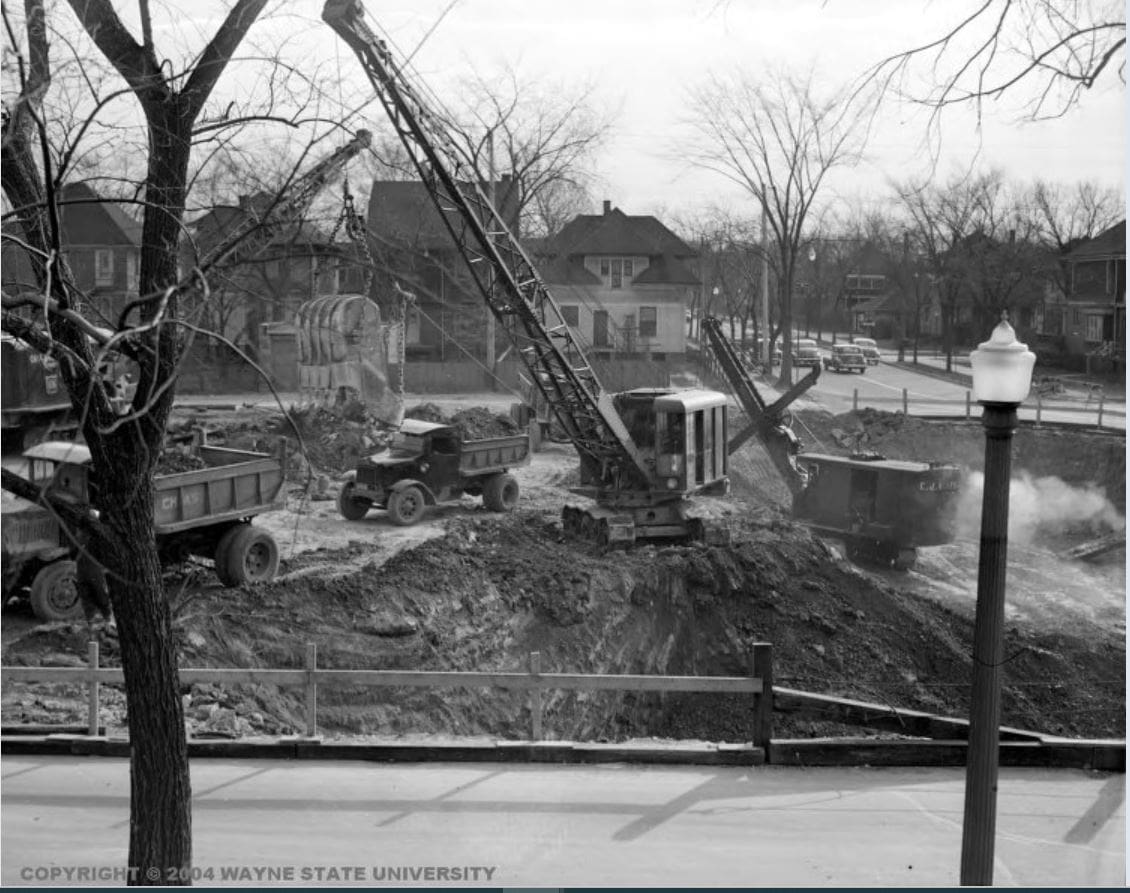 Not only a heavy contractor in the Detroit area, C.J. Rogers also ran a very large steel hauling operation. Pictured here is one of the first Mack trucks to be retrofitted as a flatbed for specialized hauls in the 1940s. C.J. Rogers Trans. Co. quickly became well known as “Specialized Steel Haulers” in the Metro Detroit area, working as a carrier partner to new automotive manufacturing plants. 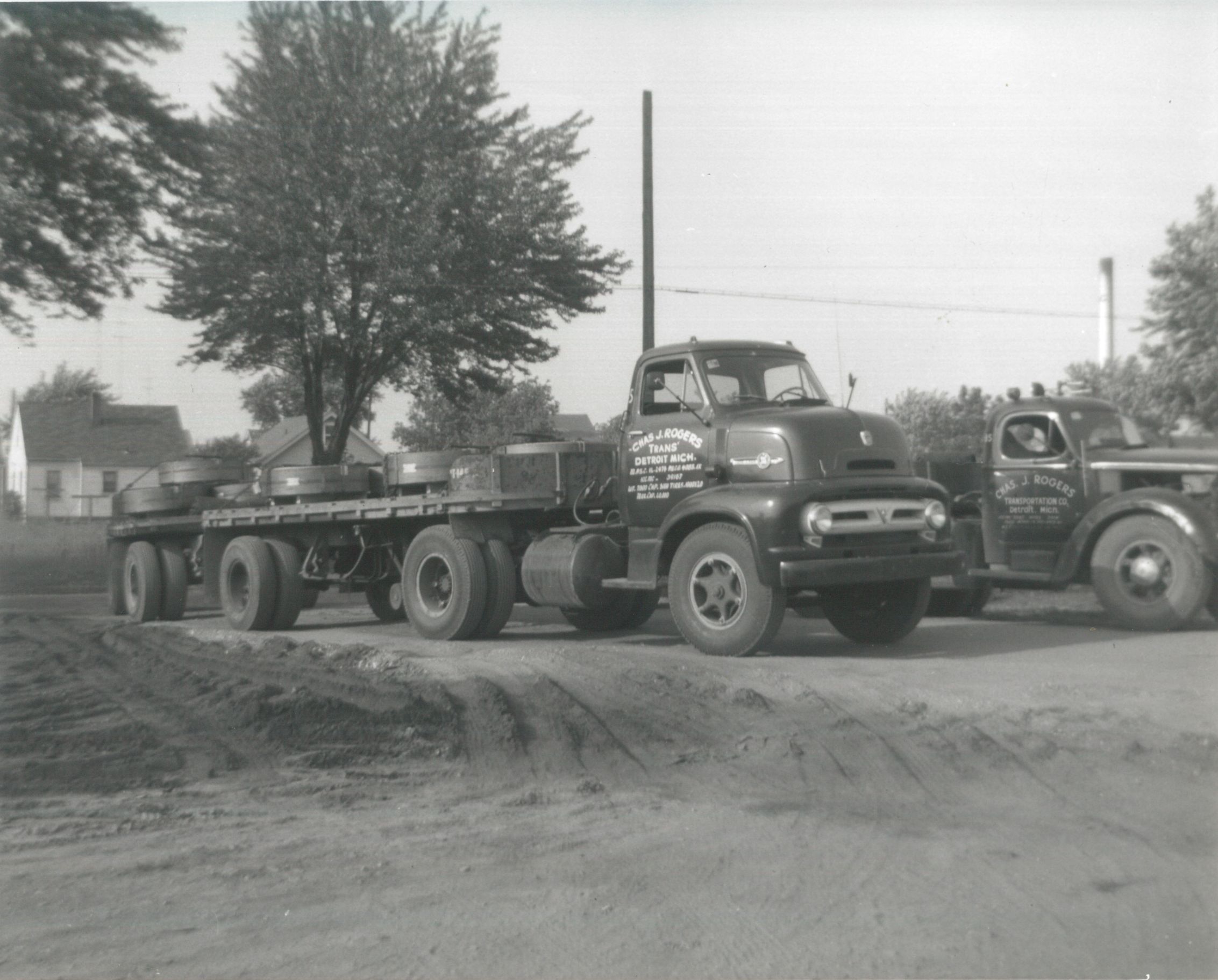 A pair of 1940s MACK LJSW Six-Wheel Dump Trucks: Fleet numbers #50 and #51, looking brand new, owned by the CHAS. J. ROGERS company, are posed for a professional photographer before being put to work. Lettering has been finished, but sideboards and rear mud flaps have yet to be installed. From all appearance, these trucks are likely the gasoline powered version of the LJ, very common in the 1940s before diesel engines became the accepted power in the 1950s. 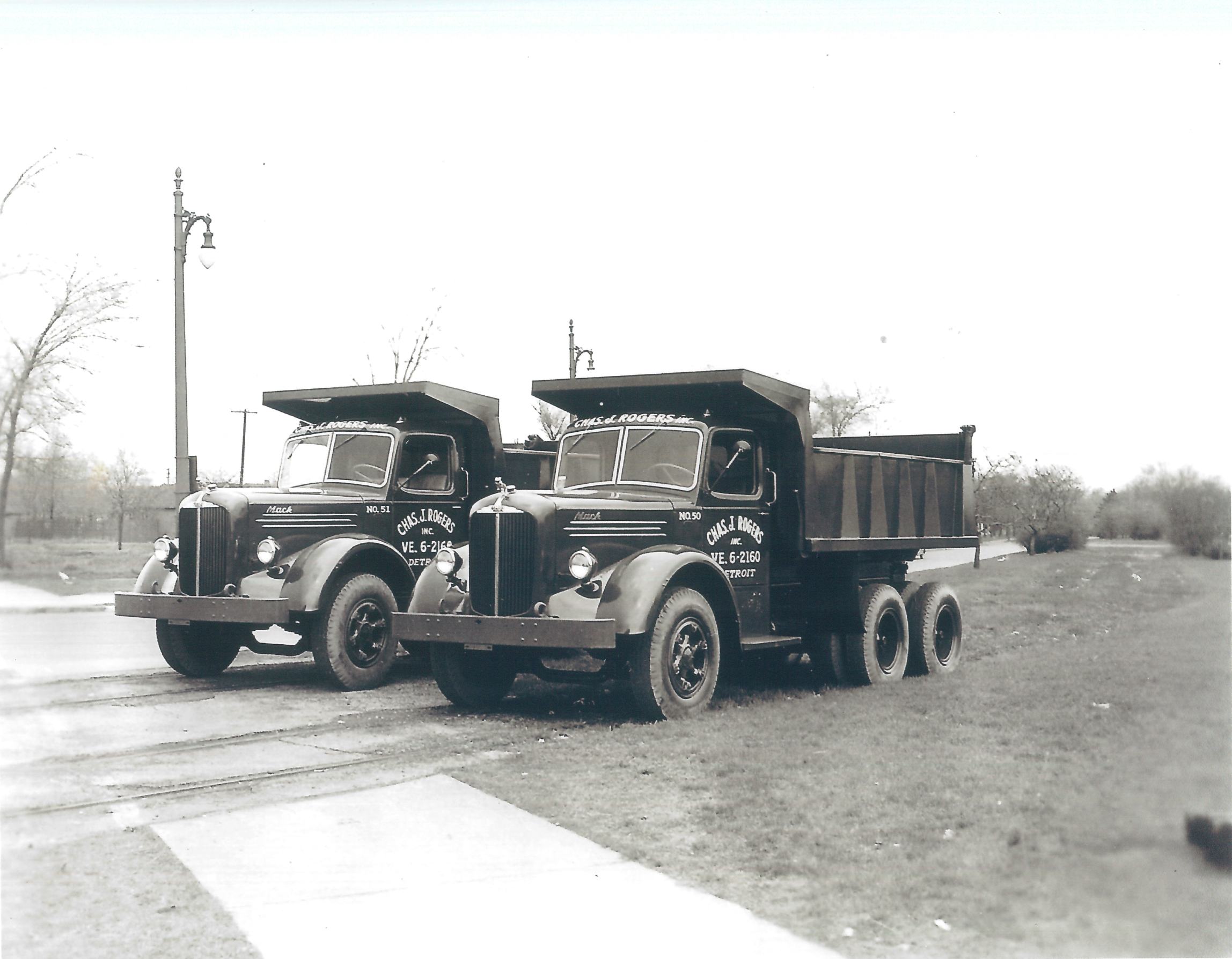 These original Macks were restored by Charles J. Roger’s son-in-law, William H. Leoni Sr., in 1974. These trucks are chain-drive Macks used in the 1920s through the mid-1950s primarily for dirt moving jobs. They can be found at the Mack Truck Historical Museum in Allentown, PA. 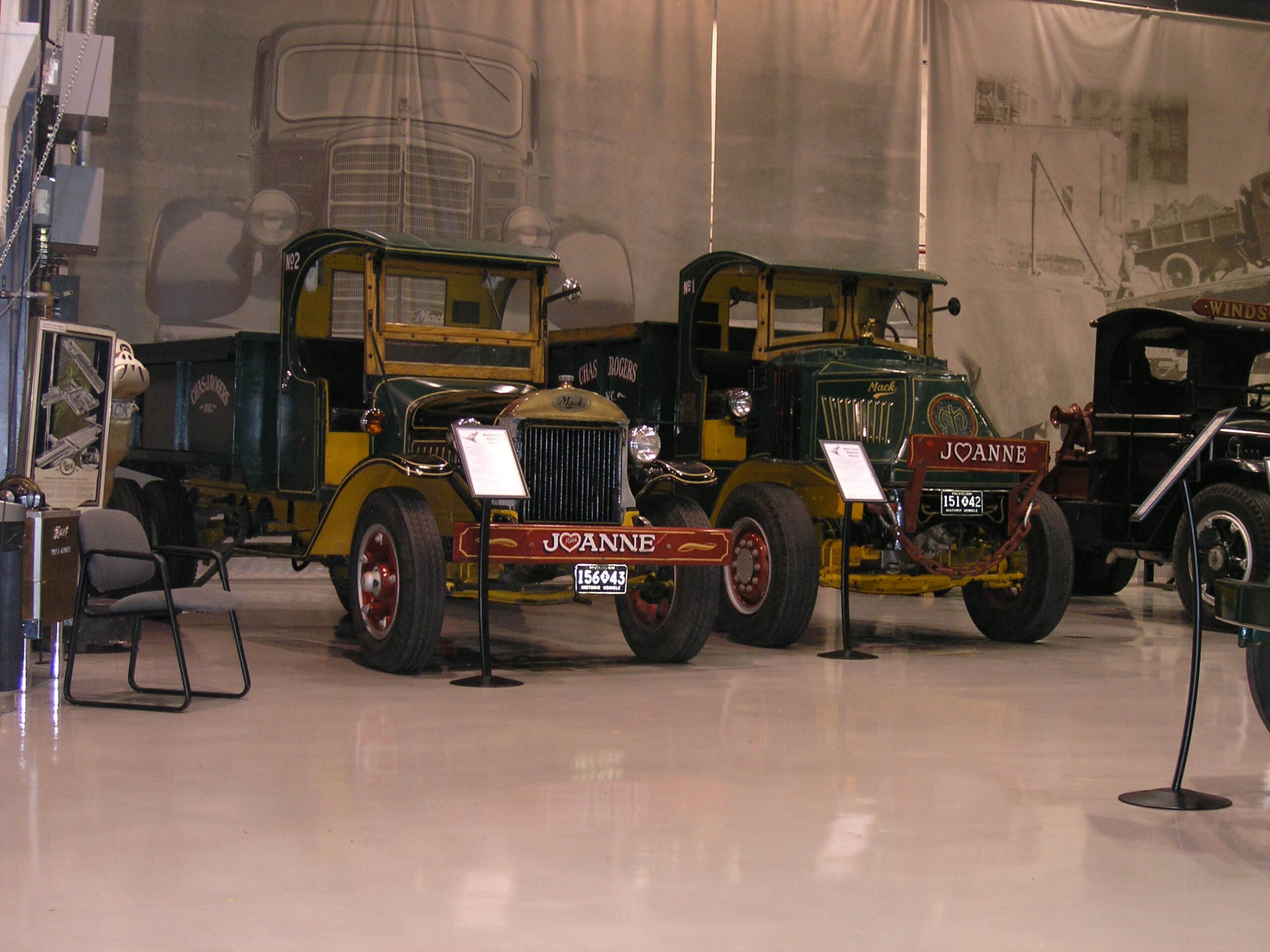